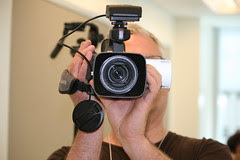 Chris is a good friend and a co-blogger on our food blog . I knew there was going to be trouble when I saw him with his camera equipment. He spent a lot of time with interviews and produced this great video below.

I am really happy to have another DC media maker who is likely to scale great heights.
He is @csuspect on Twitter and in case you folks are not aware of the gory details of his past I am outing him here :

Chris Condayan serves as the manager for the American Society for Microbiology's public education outreach initiative in which he oversees the production of the society's MicrobeWorld Radio outreach program. Condayan has spearheaded ASM's efforts in podcasting, establishing the organization as the first scientific society to have a daily audio podcast and a weekly video podcast. He also regularly presents on podcasting and new media at many science and education-based conferences in the U.S. and Canada.
Prior to his work with ASM, Condayan served as the director of communications for the National Mental Health Association where he developed and implemented communications strategies for the oldest and largest mental health organization in the nation.
Previously, Condayan produced his own weekly alternative music radio show, Capitol Radio, on CBS Radio's 106.7 WJFK in Washington, D.C. ( actually this is taken word for word from http://www.newmediaexpo.com/SpeakerBios/CondayanChris.htm)

If you are in the Hyattsville area or if you just want to listen to some good info visit his blog at http://www.hyattsvilleh4x.com/

Update : I forgot to mention his punk band is playing Rock and Roll Hotel on June 6 with Pietasters and Alleged Bricks