My Pop!tech experience started from Dulles airport itself where I met Ann Pace from the Washington Speakers Bureau.  By a stroke of good karma the flight crew had asked her to change seats and the changed seat happened to be next to me. Despite the early hour we had a good conversation on Pop!tech and she gave me a few good pointers on what to expect.

The drive from Portland , Maine to Camden is about 2 hours and the scenery is very pretty. Among the towns I passed it seemed that Camden was one of the bigger cities. My Hotel was a beautiful place called Point LookOut which is in NorthPort about 8 miles from the Camden Opera House where Pop!Tech is held. Point Lookout cabins are very nice and the WiFi just rocks.

The downtown Camden is about 3 blocks long and Pop!Tech is a huge event here. At registration I was excited to get a Timbuk2 bag as the conference bag with a nice hand woven scarf and pencils.

Pop!tech had purple bikes that you could ride around town and the bike would take pictures automatically and geotag them 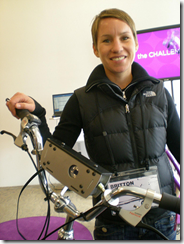 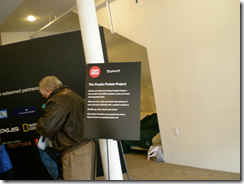 I had lunch at the only Thai Place in town, and either I was hungry or the spirit of home cooked Thai Green Curry was specially fulfilling.

The Pop!Tech welcome party was at the Waterfront Restaurant where the appetizers were amazing.

The official beer for the evening was Sam Adams :)  and I met some awesome people.