Reconnecting with Dan Roam - Author The Back of the Napkin 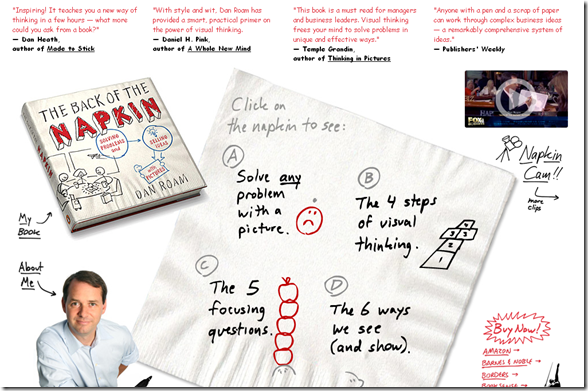 In my first email to him after maybe 2 decades i almost said " Dude ! Where is the beard !". I met Dan Roam in the late 90's in the Soviet Union soon to be Russia where  he founded Red Square Productions in Moscow. I am not sure if he remembers this but my first ever video game in my life was from him on a 8088 HP laptop that had a battery that weighed like a tank. Dan looks very young in this picture above but don;t let that fool you , he looked younger when I knew him.  I hope I meet him again sometime soon.

It amazes me that I have met so many authors and consider many of them my friends. Here is a list of authors I have met - Dan Roam, Tim Ferriss, Guy Kawasaki, Rohit Bhargava, Debbie Weil , Geoff Livingston, Greg Cangialosi, Charlene LI, Sarah Lacy, Barry Moltz, Frank Warren, KD Paine, Jay Berkowitz, Malcolm Gladwell,  ( I may have forgotten some people)

Dan Roam's blog is at http://www.digitalroam.typepad.com/ and his bio courtesy of the Advertising show (http://www.theadvertisingshow.com/en/art/?1136)

here is a presentation he has on Slideshare :

Dan Roam is the founder of Digital Roam Inc, a management consulting company that helps business executives solve complex problems through visual thinking. His business book The Back of the Napkin: Solving Problems and Selling Ideas with Pictures was published March 2008 by Penguin Portfolio.
Through consulting projects and lectures, Dan has used his unique visual thinking approach to resolve business challenges at Microsoft, Google, Wal-Mart, eBay, Wells Fargo, Infosys Consulting, The Federal Reserve Bank of New York, The Thomson Corporation, Sun Microsystems, Peet’s Coffee & Tea, The MIT Sloan School of Management, The US Navy, Time Warner, Microsoft, Schlumberger, Aetna, HSBC, Lehman Brothers, GE, and the United States Senate.
Dan developed his understanding of the power of pictures as a business problem-solving tool when he founded Red Square Productions in Moscow in 1990, the first marketing communications company in the (then) Soviet Union. When he arrived in Russia his lack of Russian language skills forced him to use his visual skills to share ideas with colleagues and clients, and that is when he began developing the visual thinking tools introduced in The Back of the Napkin. When he returned to the United States seven years later to become a Client Partner at Razorfish, he spoke Russian well (not that it did him a lot of good anymore) but still found that pictures were the best way to share complex ideas and to solve business problems.
Dan received two degrees at the University of California, Santa Cruz: one in fine art and the second in biology. This combination of creative art and hard science began Dan’s cross-disciplinary approach to problem solving that is the backbone of his work and seminars. Dan is also a licensed pilot, a skill that demands constant practice in understanding visual information displays. Dan has applied his business-oriented visual thinking skills while living and working in Switzerland, Russia, Thailand, France, Holland, and the US. He lives with his wife and children in San Francisco.

The new dimensions of measurements will include the following: Podcast Listens VR Views