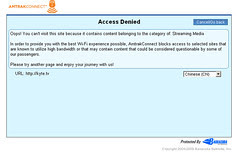 I am writing this on the Acela 2170 to new York from Washington DC using the wifi on the train. Amtrak is testing the service out. This is the 3 p.m train and in the car that I am in I counted 20 laptops. The connection was spotty and I had to reboot a couple of times to actually get the signal. This is not unexpected for a new service but I think my N95 tethered to TMobile’s service is faster. After releasing and renewing my IP a few times I could reasonably surf the net.

When I followed a link from Twitter to Kyte.tv  I got the screen above. Now while this is not unreasonable  due to bandwidth concerns I shuddered at the words “ or that may contain content that could be considered questionable by some of our passengers” . Who is deciding this ?

Rob Pegoraro reviewed the Amtrak Wifi for the Washington Post :

By way of comparison, the in-flight WiFi sold by such airlines as AirTran, American Airlines, Delta and Virgin America generally blocks just Internet-calling services. Passengers have reported favorably about watching YouTube clips from 35,000 feet -- though others have found that when too many passengers try to jump online, the connection bogs down to an unusable degree.
Amtrak's press release (PDF) says it's "initially" offering WiFi for free; at some point, the railroad will review this policy and consider expanding access to other routes and stations.

Should this service become a non-free option (and my employer weren't picking up the tab), I doubt I'd pay. It's not so much the relatively slow speeds of Amtrak's WiFi; it's more that I've come to appreciate the value of enforced offline time in which I can read, write, nap and generally clear my head.

In my opinion Amtrak should carefully consider how customers use the service and set the capacity to match that otherwise they will end up with a service that is broken on start. What do you think ? How can Amtrak get over this brandwidth vs which sites to block dilemma? Have you used this service ?

Rob Pegraro:"It's not so much the relatively slow speeds of Amtrak's WiFi; it's more that I've come to appreciate the value of enforced offline time in which I can read, write, nap and generally clear my head."

Shashi, man, you know sometimes, this is so true. I like this a lot! tx for the post.

I think between people who prefer offline time and people who have 3G cards or tethered phones (and people that have nothing to do with internet), Amtrak has a weak business case. It will be a cool thing for a small pocket of users, but not enough to justify Amtrak's investment