This article was first published in my column in the Examiner.com 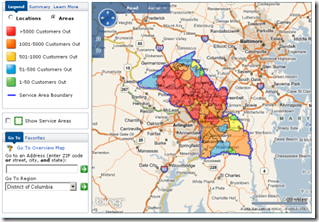 July 25th 2010 :Today started off as a nice albeit hot summer day and then the storms struck the DC area this afternoon brining with them wind speeds of over 70 mph and a tornado like storm that landed near the W.Montgomery Ave. Rockville MD. According to the Washington Post at one time today more than 400,00 people were without power. The Washington Post article also says "The number of outages in the Pepco service area appeared to be the largest since Hurricane Isabel in 2003." At the time of writing this article the Washington Post put the  number of folks still without power as Pepco: 292,405 | Dominion: 31,461 | BG&E: 64,364. Callers to the PEPCO line reported that the automatic response was that the power would be restored back to normalcy by July 30th  The Pepco spokesperson Mary Beth Hutchinson clarified on WTOP news says they are calling in all available crews and will be working all night to restore power to customers. Pepco expects power restoration to be a "multi-day effort..

Pepco also swung into action in the Social Media with Pepco Twitter spokesperson Andre Francis reaching out on Twitter. Atleast they seem to have a good crisis plan in place and have activated it. if you are still out of power you are adviced to call 1-877-PEPCO-62. The ETR ( Estimated time of restoration) may not e currently accurate due to the overlading of the systems.

See  the conversation about Pepco on Twitter http://search.twitter.com/search?q=pepco  I wish Pepco the best in quickly restoring the power.

I think there is a case for underground lines just like Joe LaCour tweeted "You think PEPCO would learn and bury power lines. If 200K families each lose $200 worth food, that's $40 million." I am amazed that the capital of the world's most powerful nation still has overhead lines while the cities I lived in converted to underground cables in the 70's.