Day 2 of the conference I decide to skip meeting anyone for Breakfast. Breakfast meetings are good only if you stay close to the convention center and don't have a late night). Scott Stead gave me a ride to town as I was staying with family 15 miles from Downtown. On the way to the Austin Convention center we pick up Jonny Goldstein and Gerry T. I also get introduced to kristen crusius aka @kroosh . 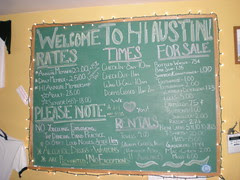 The International Hostel in Austin seems a cool place with a lake view, gardens etc. On the way I saw rowing teams practicing on the lake.

The first Twitter message is from Kim Haynes (@khaynes) of Bull Dog Solutions who is listening to the panel "Creating Findable Rich Media Content" .( SXSW podcast here)It takes me a while to find Room A . Luckily Kim has given me precise directions to her seat and so even if the room is dark I find her and we talk in whispers.

Peter Cole on the panel is interesting , he is the Creative dev director for AQKA and I want to look for him after the panel but we never get to connect (AQKA and Network Solutions are owned by General Atlantic) 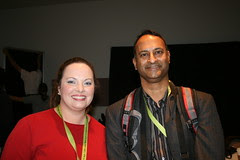 Andrew Lockhart has a summary of the panel on the blog Thinking Interactive . During my search for the Room A I had run into Hugh Mcleod who told me to come and see him at the BlogHaus to get a exclusive card so I asked Kim to come along and we went to the Blog Haus.

The blog haus was full of bloggers, many big names in the blogging/ social 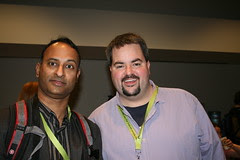 media sphere.Visitng the BlogHaus was a great opportunity to meet my online friends. You cannot miss Liz Strauss (see my post about meeting her) as she is 6 ft tall.She was one of the first people I met and she recognized me from my picture. We had not talked about meeting at SXSW so i was thrilled that we connected. We talked about the forthcoming SOBCon08 that is happening in downtown Chicago from May 2-4 at the Summit Executive Center. 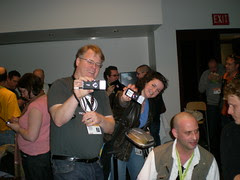 I introduced myself to Loren Feldman of 1935media.com. I commented to him that I wanted to see him and Scoble together.I did get that chance a little later that afternoon and they were all so nice to each other despite what they say online :). 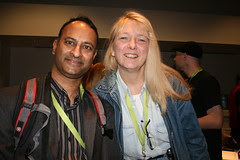 Product Development of BlogTalk Radio and Jeffery Sass @sass on Twitter. Check out his blog http://socialnetworkingrehab.blogspot.com/. 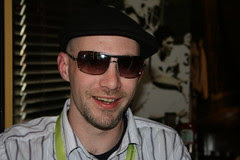 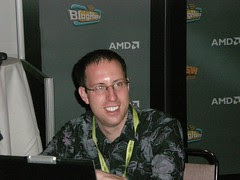 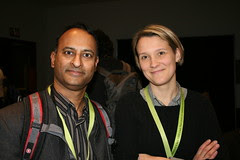 There was a moment at the Blog Haus where I met many people in quick succession. Geri Druckman whose card says "Just Google me" . Maggie Fox @maggiefox of Social Media Group 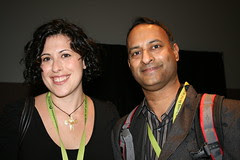 ays : "I don't have a business card, But I do have a blog" :) . She is a fantastic person and hope we can meet again and spend more time.

I got interviewed by Shel Israel for his series Global Neighbourhoods - Social Media's impact on business & culture. and I feel like I know him very well. Meeting him personally was a pleasant surprise. He is much younger than he likes to joke about online. He as humorous offline as he is online. Great guy and I was thrilled to meet him. His card says" Writer, consultant, Nice Guy".Kami Huyse calls him her mentor and Jeremiah Owyang call Shel his guide for corp blogging. 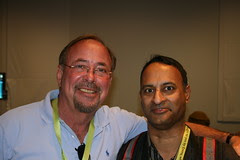 Chris Brogan who I can call my mentor seem to be in several places at one time.I ran into him on the Way to the Blog Haus and we had a great corridor conversation .He was happy for my new position. He asked me to come to the Bar Camp event where he was performing karaoke but I got lost and missed going there. Chris is great for bringing people together. 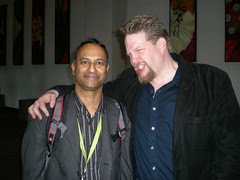 Spent a lot of time talking to Sheila Scarborough @sheilaS. She is so full of energy. She gave me a nice video that I will post soon. I was happy to meet her after being her friend on Twitter. Scott Monty from Crayon gave me an interview on video and we met several times during the next 2 days. Fantastic person to meet.

Hugh Mcleod gave me a nice drawing on a card which is a collectible. A very nice person. 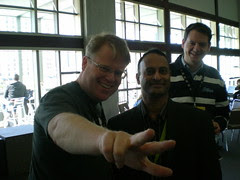 I ran into Robert Scoble and he stopped and spoke to me as I told him about what I do and how "Naked Conversations " was helpful in my job as Social Media Swami at Network Solutions. he joked that he hoped he didn't lead me too much astray. He may be in DC in June so I hope we can have a meet-up then. Along with him were Sarik Weber of Cellity

AMD were the sponsors to the BlogHaus and I spoke to Elizabeth Lee from AMD.Tara Anderson from Lijit asked me if I was Lijit user and I told her that I was buddies with Barney Moran from Liijit and she wanted any feedback on Lijit. its a widget I use on my blog. Other fantastic people I met were - Cathy Brooks from Seesmic , Jitendra Gupta CEO & Tedd Corman co-founder of sezwho.com, Saul Colt and Sunir Shah from FreshBooks , Katherine Druckman of LinuxJournal, Eric Smith Pres. Unwired Nation, Chadrick Baker of Metaversatility.com, David Delcourt of Makemesustainable.com , Nikhil Nilakantan of Socialspan.com , Chris Morrison of Venturebeat.com (I asked him if he was Sim from Utterz). CC Chapman

I went out for lunch with Liz Strauss to PF Changs and when we tweeted that we had some great folks join us : Shama Hyder @afterthelaunch, http://scrapblog.com/ , Rohit Bhargava , Joe Castillo - The flavor of New Ideas , Brian Breslin of Infinimedia.com , Christina Jones and Arian of B5Media. 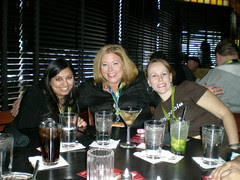 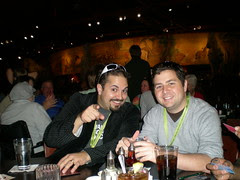 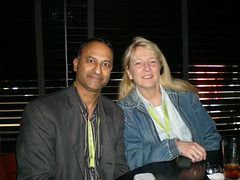 After lunch I went to the panel "Worst Website Ever: That's So Crazy, It Just Might Work"

A good Short review of this very funny panel by Rex hammock maybe worth the read. among the panel crowd I met Rob Jones of the 2Sides Design Studio whom I had met when he was working with Frog Design and they had done some work for Network Solutions. I also met Vijay Patel after this panel who works for the University of Colorado- Boulder. He was going for the premier of "Harold and Kumar go to Guantanamo Bay". Lucky guy.

'Think of it as a science fair with free beer. Ample doses of electricity, tomfoolery, mayhem, makers and music combine to form one exquisite geek talent show. Sponsored by Make Magazine, SXSW Interactive, the International Game Developers Association of Austin and Amaze Entertainment"

The description fits, I remember a machine that conducts electricity to music and makes its own noise. Wonder why the beer was green at this party?.

After this party when we walked to the Google party we saw a big line and so we decided to skip it. At this time a Homeless man walked to Gerry T and he along with Jonny goldstein went to buy him some food. I met Celeste Mitchell a fellow DC ite who works for Discovery while waiting outside the Google Party. One thing we did see was that the Google party had some kind of lights as SWAG as we saw people come out of the party with lights shining all over. We walked to the Frog design party and as I mentioned i would have been better off taking a cab as We got lost and walked several blocks in the opposite direction. One good thing howwever was that on this walk the wrong way I met Kyle Monson associate Editor of PC magazine who was also headed to the party.

Other friends at the Frog Design party we met were Jim Long @newmediajim , Adele McAlear, Colleen Coplick who gave us some good monster finger toys :). I met @popcandy Whitney Matheson she blogs about Pop culture for USAtoday and was very interested in coming to DC Blogger events.

The next party was the 16 Bit: SXSWi's Opening Night Afterparty at Scoot Inn
where I saw a a show" 999 Eyes, an authentic human oddities freakshow" ( I will put the video up soon and link from here)I also met Hilary Mason @hmason 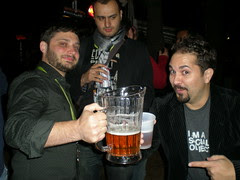 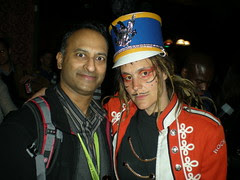 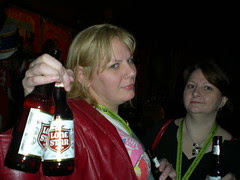 What we missed was the impromptu party that Gary Vee hosted and about 40 twitterers joined as they felt the lines at other parties were too long. See Brian Solis post about the party we missed.