I have been following SXSW with interest and wanted to attend one day.Last year I heard podcasts from SXSW that talked about Twitter and everyone seemed to be having such good fun and raucous. I never imagined that life would change so much in this one year and I would be part of SXSW as an attendee.

I was not the typical attendee, My wife had sent a chaperone with me - my 2.5 year old son 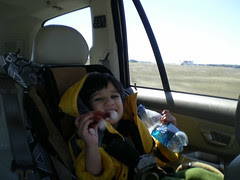 Before you imagine that he was hanging around in the Austin Convention Center hallways or watching me drink at the parties let me tell you that my wife's sister lives in Austin and has 2 kids. So while I attended SXSW The kids had a great time on their own.

I would say the SXSW experience started on 7th March in BWI where I met Rana June. Since the weather in Dallas was bad the previous day it upset the travel plans of a lot of people including Rana. Over Twitter I heard that Christina Warren aka film_girl had to share a rental car from Dallas to Austin with some fellow SXSWers as American had cancelled all flights from Dallas. Rana was a standby for the same flight that I took with my son. We tried to see if they would let me keep my son on may lap but rules are rules so we parted company at the gate. Rana and my son got along very well because they are both very sociable people. 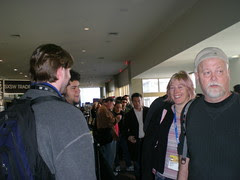 Arrived in Austin and after a few hours headed to the Austin Convention Center. The first people I met were Stowe Boyd and Stephanie Booth @Stephtara and we went to register. Earlier in the day Scott Stead and Jonny Goldstein had videocasted live using Qik showing the lines and the crowds , so I was prepared for the lines. On the elevator I met Jason Falls and Shawn Morton - they were going the other way and we agreed to meetup later. Unlike other conferences I could see everyone riding the elevators and walking around with Shiner Bock beer in their hands as if that was being given away at registration. ( you did get a coupon for one free drink per day which I never used )

Surprisingly registration went fast. I had already uploaded my picture using the online tools so it was only a momen

t or so before I got my pass. The pass is very valuable since its the ticket to all the panels plus the entry to parties. I liked the way the pass is 2 sided so you don't have to worry about turning it every time so people can read your name.

I was disappointed by the SWAG bag. I would have liked atleast one T-shirt in the bag. I did not go through the bag fully but it was mostly paper. The bag had a drawing by Hugh MCleod . 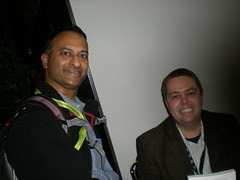 The first session I attended was Andy Beal's reading his book "Radically Transparent" . His presentaion was good and I must ask him if he can send me a copy. Its a must have book for all corporate social media strategists so I purchased one and had Andy sign it for me. We have exchanged a few emails regarding Andy's new reputation tracking tools called Trackur and I would have been happy if we could have spent some time chatting but never got the opportunity. 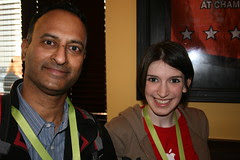 I saw @technosailor's tweet that he was at Champions ( across the street from the convention center) and so I walked out of the Convention Center for the day. At Champions I met Christina Warren aka film_girl .We seem to know each other virtually and it was very great to meet her in person. She is a Blogger/Writer/Video Host - downloadsquad,com, squadcast and TUAW.com.

I met a lot of cool bloggers and personalities at this meetup including Laith Dahiyat my former colleague at Network Solutions and friend who lives in Austin. In the picture you have Tris Hussey ( he took a lot of photos http://flickr.com/photos/tris/) , 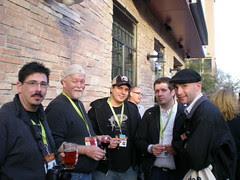 Stowe Boyd , Jeremy Vaught head honcho of B5 media, Scott Stead and Aaron Brazell @technosailor. Stowe introduced me to Hugh MCCleod. Met Stephanie Argesta a big time Affiliate Guru and we discussed a few mutual friends like Adam Veiner. I ran into Gerry T. I saw Laura Carbonnau who recently moved from DC to Austin. The next stop was the first party of SXSW - mix at SIx . Good snacks and of course liquid refreshments. I caught up with Peter Corbett who seems to be travelling so much and also nurturing his company to success with some big contracts. He gave me a brief interview in line at the SIX where he talks about his latest project Iheartcavemen.com

At Six I met a lot of people as Scott, Jonny and myself occupied a nice couch taking turns at watching our bags. Fellow DC ite Leslie Bradshaw came and said hello with Leora Zellman . Rohit Bhargava (World traveler & Author of the forthcoming book "Personality Not Included") sat and spoke for a long time. Met Bryan G Rhoads from Intel who showed 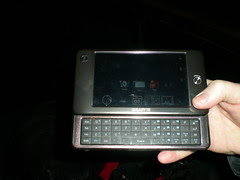 us a prototype of a Intel mobile computer that has a amazing processing power. Jen Cardew stopped by to say hello. We had missed a meetup when she was in DC a few months ago. 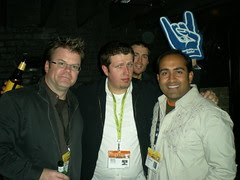 Met Tamar Weinberg who now works for Mashable. I met Peter Cashmore who was distributing giant Mashabel Rocks hands and in the picture above you can see him between Rohit and SCott. Rana arrived finally in Austin and we met again at Six . After the party we had a quick bite to eat at Champions and headed home tired after our first day. 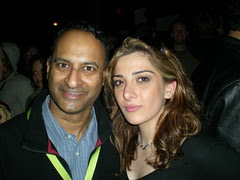 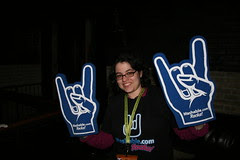 Update : Another Online friend that I met on the first day was Richard McInnis with whom I have spoken many times and it was wonderful to meet him offline. In the Andy beal talk I also met : Andrew Feinberg of Capitol Valley . You may want to listen to Andrew's interview with Andy Beal on Blogtalk Radio talking about reputation management.