One of the first pics appearing online from the Mumbai area are from this Indian Blogger http://vinu.wordpress.com and @vinu on Twitter. Many  other pics  http://www.flickr.com/search/?q=mumbai+or+bombay&s=rec

If the phone lines are jammed then you can take this helpful info from @Gauravonomics great resources Mumbai Help bloghttp://tr.im/1jca & http://groundreport.com/ and @bobgourleyhttp://tinyurl.com/65gh69

India is still secure , life will go on as you will see at dawn so my advice to anyone traveling is not to reconsider travel plans. The country is very resilient and Bombay is very strong. The terrorists are trying to harm the economy by spreading fear and causing cancellations I think. I was there in July ( My parents live there) 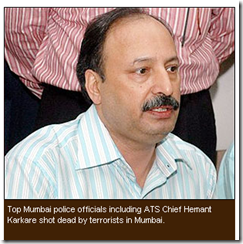 I salute the Bombay Police who had 3 casualties : Hemant Karkare, the chief of the police anti-terrorist squad in the city, was killed during the attack.

CNN advising twitter to keep up with the news in #Mumbai?? Wow... this is going mainstream... more mainstream..

paulkidd: Live feed from BBC news with coverage of Mumbaihttp://wwitv.com/a1/b3307.asx