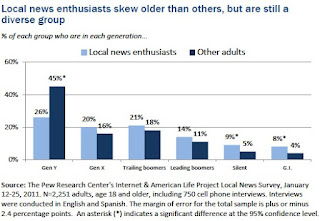 This is good news for most local publications.  I read these local media publications  avidly  :
I was happy to see the latest research from Pew Internet Research on the topic of local news

Are you a local news enthusiast? Maybe we should have our own Facebook Group. What do you think? Read the rest of the report and more details at http://pewinternet.org/Reports/2012/Local-news-enthusiasts/Summary-of-Findings.aspx