Other than the brave folks who work in the Navy and allied services, not many people can say that they have completed a tail-hook landing and a catapult take off from a aircraft carrier. Nov 2013 was a special month as I crossed out a so far unattainable bucket list item - a visit to an aircraft carrier at sea. The Navy has a program called the Distinguished Visitor Embark, which takes civilians from all walks of life to visit a Navy ship and experience first hand the working of the Navy and meet the brave women and men who serve the country.  I was part of a Distinguished Visitor Embark group thanks to Patrick Foughty who works at the Media Operations, Digital Media  and thanks also to  George Wright,  office of Commander, Navy Installations Command and the Commander, Navy Installations Command.
This is going to be a blog post and will be worth reading. The experience started in Norfolk which has a large Navy presence and this is the view from the Renaissance Portsmouth. In the program you take care of all your arrangements to go to and fro from the Norfolk Naval Base.

We were met by April Brown and Jim Moir of the Public Affairs office of Commander, Navy Region Mid-Atlantic and we were taken to Chambers Field one of the largest Naval air stations in the world.


We got a briefing from Lt. Alex Judd pilot of the C-2 aircraft about our tail hook landing on board the USS George H.W Bush. 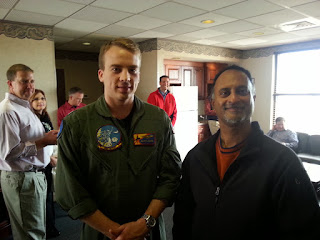 We were given “cranials” a helmet and flight goggles to protect ourselves and a jacket to wear in case of a emergency water landing. The seats on the C2 face backwards away from the pilot , very different from commercial flying. 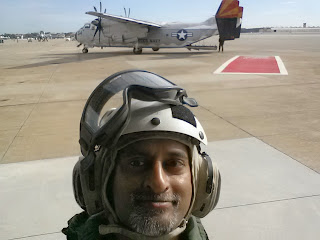 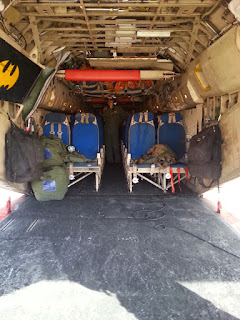 Seats are not airline quality but were not uncomfortable. The cabin is not complete with roof decor and you can see that all the space is used for storage. There was only one row with a window and I did not sit there. 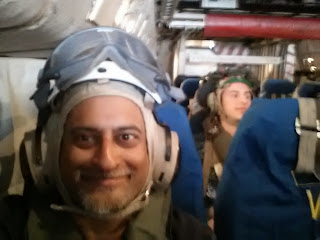 After about a 45 minute to 1 hour flight the crew told us that they were about 10 minutes away from the tail hook landing on the USS George H.W Bush and then signaled with their hands “ Here We go, Here We Go” Seconds from landing. I cannot describe in words the feeling you get when the plane lands and decelerates from 105 mph to 0. Your heart goes thump and your body feels the excitement. Then the door opened and I thought I had landed on the Starship Enterprise. 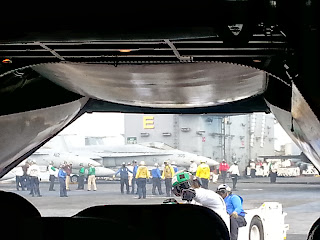 We were lead across a active flight deck and the scenery is a little bit of a haze for me as we followed the safety officer in single file amidst Jets taking off and people signaling and tractors moving aircraft. We were lead to the Captains in-port Cabin where we were offered Chocolate cookies( these are a premium commodity on board the ship)  and coffee. 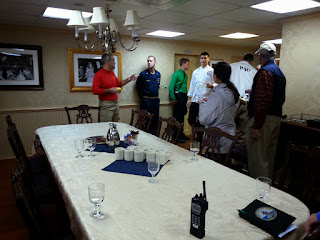 Captain Andrew Loiselle, Commanding Officer, USS George H W Bush (CVN 77) introduced us to his staff -Captain Matthew Paradise-XO, Master Chief David Carter-, Command Master Chief, Commander Charlie Drey -Public Affairs Officer and told us a very fascinating story of the ship and its launch and activity that was ahead for us and some of the artifacts on board the ship from the George H.W Bush Presidential Library. 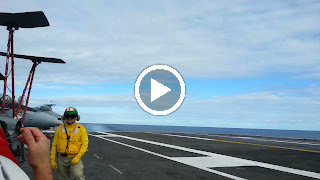 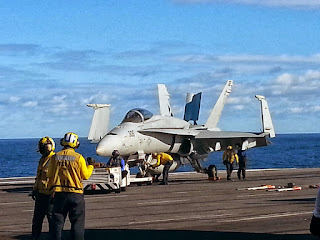 We then spent time on the flight deck watching Flight Ops, seeing F/A-18 Hornets and Ea-18 Growlers. We got the privilege to visit the bridge and get a picture taken sitting in the Commander’s chair and watching the crew on the bridge at work. 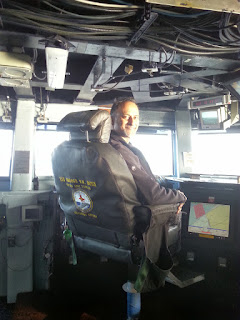 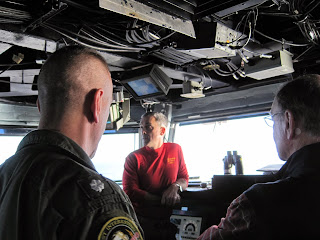 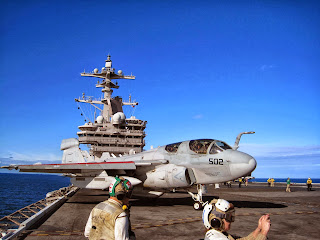 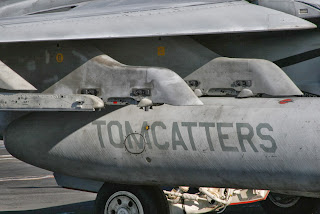 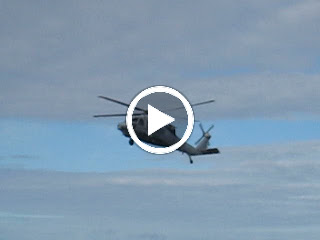 After visiting different areas of the ship we sat and had dinner that was so well organized that they had a seating chart as well. For a ship I must say the food was excellent and that is reflected in my Yelp review of the ship. We thanked the crew who served us this amazing dinner somewhere away from land in the Atlantic. 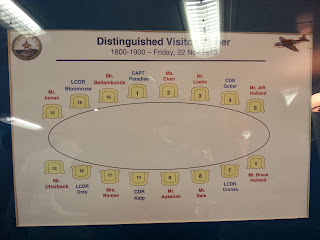 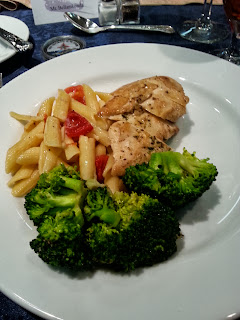 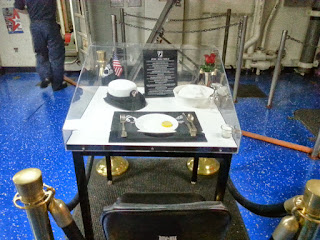 We went to the library on board the USS George H.W Bush and Chaplain Peters, the fleet chaplain explained the media center and books. Several   members of the crew pursue higher studies, pray ( Services from many religions) and there is a area called United to Read where crew members can read and record stories for their children which is then sent to their families back home to keep the bond strong. The entire ship has 1500 terminals for a crew that is between 4500 and 6000 in number so time on the computer and internet is a premium. There is no cell signal or wi-fi on board the ship. very often to conduct exercises of measuring the electronic footprint of the ship the crew will be asked to turn off all cell-phones and gaming devices. 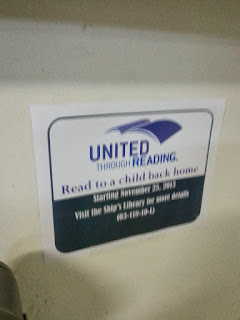 We visited the ship’s hospital and the ship’s doctor medical Office David Picken Slim told us about how the chip has a walking blood bank, crew members who sign up to donate blood in case of an emergency instead of storing blood aboard the ship. The ambulance on board is in the form of the backpacks( see photo below) and it is a challenge to carry patients through narrow stairways and the crew trains for these circumstances. It is a good thing if the beds are empty. 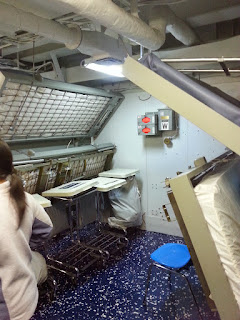 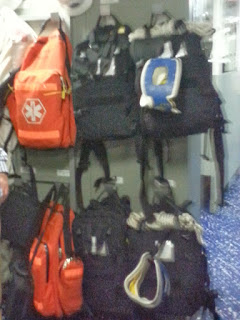 After this evening tour of the ship we went back to watch night flight ops. I cannot tell you how difficult it is to land on a ship that is moving during daytime and imagine doing this in the night as these brave pilots do every day. It was interesting to see the Helicopter blades folded for storage. Space is a premium and everything on board seems to fold specially aircraft wings. 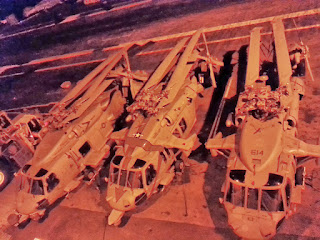 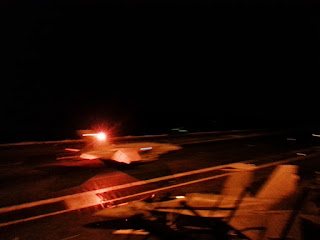 We were given guest “suites” which were comfortable and since this was an active ship I am sure the crew has learnt to sleep through the announcements that take place even during the night for operations. 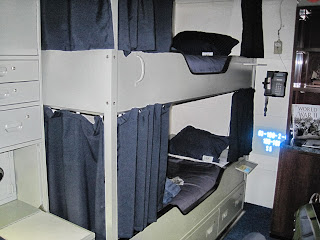 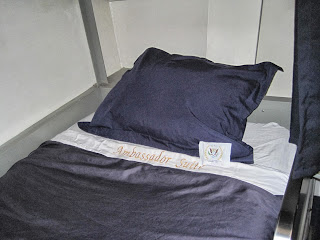 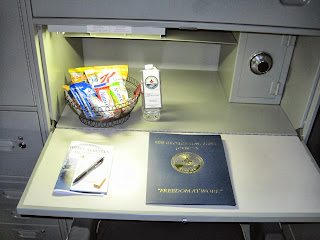 Look there is a Starbucks in a area called the Lone Star Cafe and other stations like the ice cream bar.

Space is a premium and they make use of every inch of the ship like placing this fitness equipment near the empty space of the stairways, walking is through narrow doorways.

My blog posts will not be enough to describe the excitement and thankfulness we felt on this visit. This part one and the experience of the first day. More posts will follow. Watch this space.

Thanks again to the brave men and women of the Navy and the other services for their service to the country.
Also see my post on the Food and Beverage experience on board the USS George H.W Bush
at November 27, 2013