The debate goes on whether Twitter is mainstream or a collection of eclectic individuals who have banded and bonded together. My friend and fellow blogger at Network Solutions Joe Loong wrote a post recently " Twitter: I was doing it wrong". At the risk of exposing my secret fetish for reading the print version of not one but 2 newspapers everyday - Washington Post and the Wall Street Journal i want to let you know that both thee papers had a Twitter article today.

1) Kathleen Parker starts off with a Quote "

"I have discovered that all human evil comes from this, man's being unable to sit still in a room."

Since she wrote the post I became her 15th follower on Twitter and at the time of writing she has 18 followers without ever Twittering. She is @katheleenparker on Twitter . Miss Parker we are waiting for you to start using twitter or at least come to this blog and comment :) In the meantime she has already received some Tweet love and advice 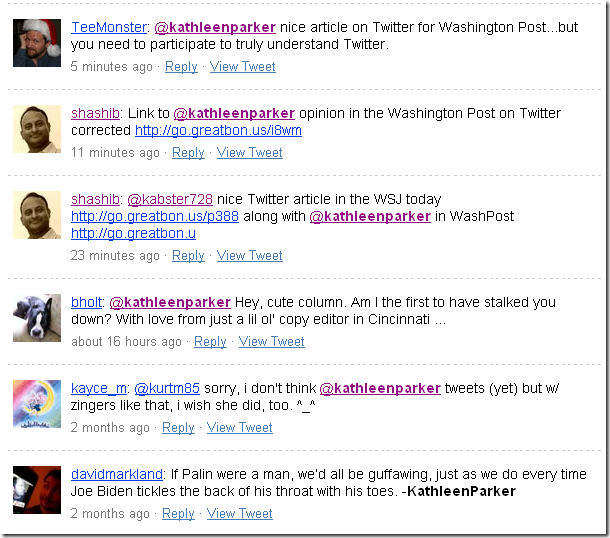 " Thinking about trying the new Chop't for lunch www.choptsalad.com " being a newbie who has used Twitter herself she has details on What? Why? where of Twitter. The applications you can use, privacy and also her take on Twitter's problems. I like her article . Congrats @kabster728 and many people can simply use your post as a tutorial.  Being on Twitter herself and tweeting frequently she has more tweet love and this is just a representation: 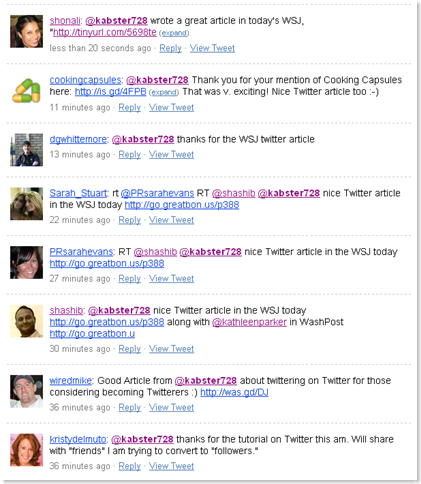 @kabster728 at the time of writing this post has 160 followers and my guesstimate it will become 500 by the weekend at least. And since Katie is from DC she totally rocks !