This month (May 2013) I traveled to Warsaw, Poland to speak at the International Conference of Deans and Directors of MBA Universities.. To plan this trip I started off using Hipmunk for my flight search and since I have Star Alliance Gold Status I wanted to fly a Star Alliance airline. Lufthansa was my final choice due to the connections in Frankfurt and probably even more because it flies a Boeing 747 from Washington DC to Frankfurt ( LH 419). of course if there were options for a Airbus 780 or Boeing 787 I would have preferred them. I am nostalgic about the Boeing 747 which I have always known as the "Jumbo Jet". My first ever international flight was from New Delhi to Frankfurt on Air India's " Maharaja" Jumbo Jet Boeing 747 in the late 80's. 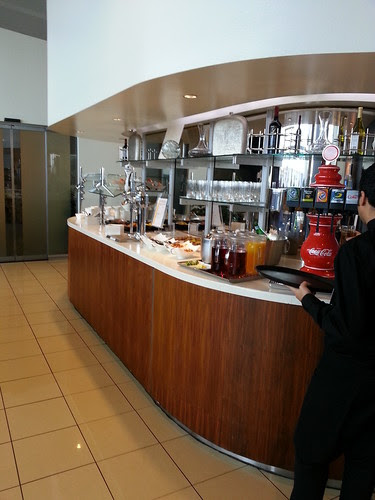 One of the perks of Star Alliance Gold status through my United Mileage Plus is that while traveling internationally with a boarding pass of any Star Alliance flight on the same day I get to use Lufthansa's Senator Lounge which is conveniently located in the B terminal. I did not know this but passengers on the Frankfurt flight can board directly from the lounge.

Since I was almost 2 hours early and the flight was also about 40 minutes late in talking off , the Lufthansa Senator lounge was a great place to relax and work with the free wifi. The choice of snacks and beverages were excellent. 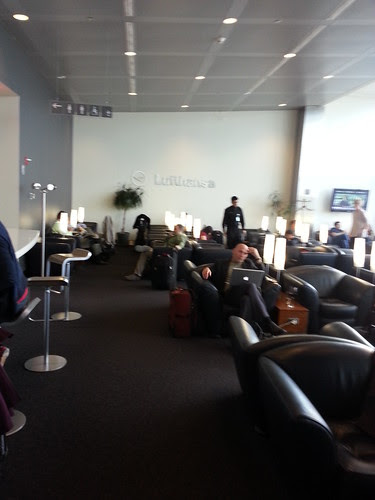 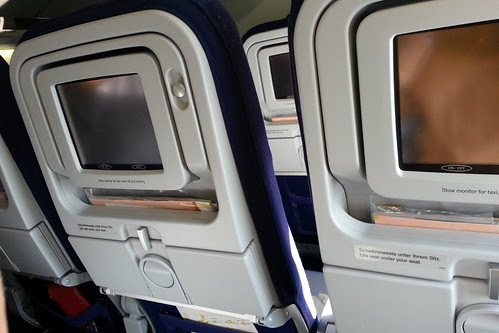 The Lufthansa  crew were fantastic. From the time that the passengers were boarding it seemed that someone was always close by to answer questions. Like a restaurant with great service they were looking for passengers who were trying to make eye contact and help them. I found that a very refreshing attitude after my experience on United's many flights.

The In-flight entertainment did not work for the first part of the flight probably for no fault of Lufthansa and the crew made an announcement and rebooted the system. Microsoft CE and that solved the problem. 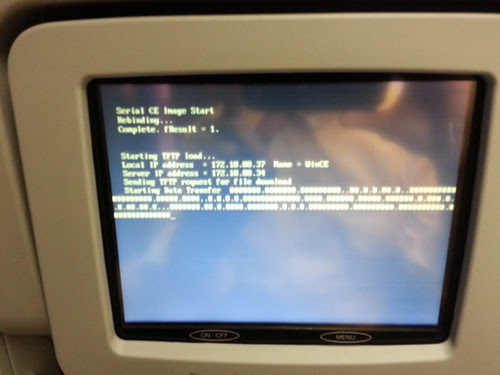 Food was excellent and my neighbor who travels a lot internationally agreed with this. Overall a comfortable flight and I got over 3 hours of sleep which was useful as I had to speak the next day. This flight did not have power points or in-flight Wi-Fi but since it takes off in the evening from Washington DC to Frankfurt I did not miss the internet. 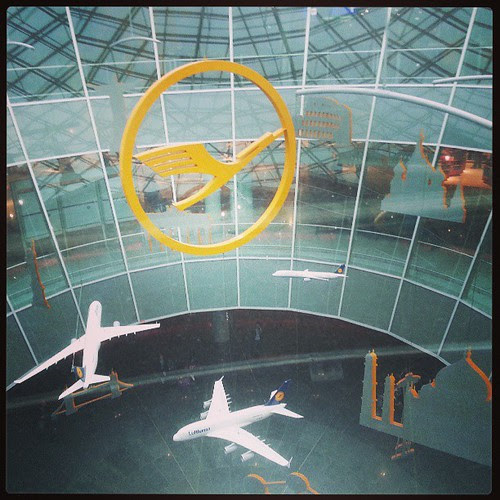 I had over 3 hours before my next flight to Warsaw also on Lufthansa. Frankfurt Airport is huge and if you have only about an hour between flights, like I had on my return you should hightail it as quickly as possible between terminals. I would say the signs are pretty good and you have to pass through security again and also Passport Control. As I was traveling to Poland which is a Schengen country my entry was processed at Frankfurt. Lines move fast here.


When I went to the Lufthansa Business Lounge, the friendly staffer told me that I had a choice of using the Lufthansa First Class Senator Lounge. I enjoyed my 3 hours in the Lufthansa Senator Lounge in the A terminal. Wifi was great and I could catch up on work and have breakfast. By nature of airports receiving passengers from different time zones, the menu always serves snacks and eats that are universal for all meals and replenished constantly. This lounge also had showers which I did not use. 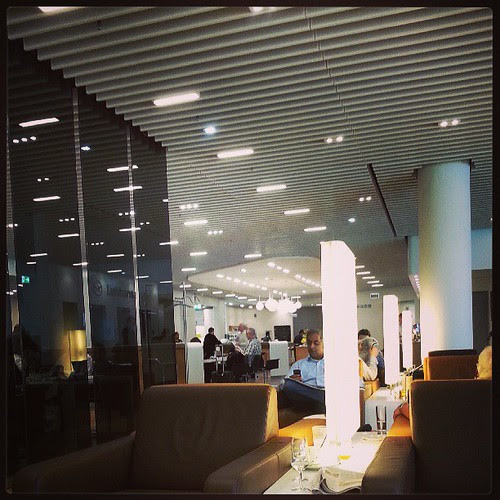 In the Business center part of the lounge there were 110v power outlets but I was happy I had carried my own universal plug set. Due to the fact that I had a lot of electronics in my bag I received a pat down and every piece of electronics received a swab. My advice is to take out all electronics from your bag and place them into the trays which may have avoided my being taken for secondary screening. it worked for me on my return trip. 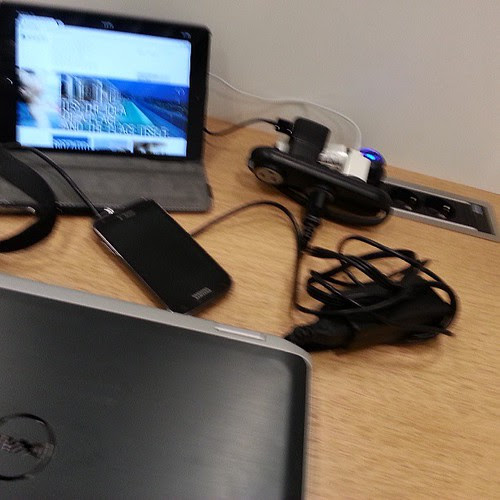 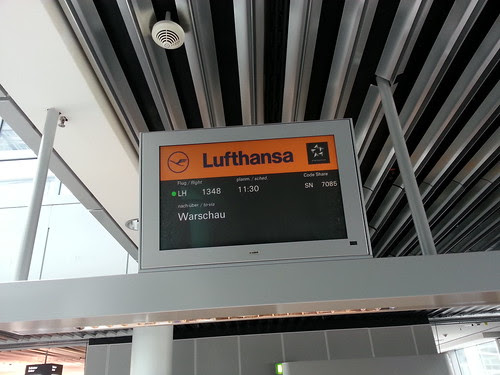 I must mention that this flight was less than 1 hour 30 minutes and still the Lufthansa crew managed to fit a beverage and a sandwich service. Reminded me of the Washington DC to Chicago flights where hunger was a constant companion due to the lack of a service other than beverages. 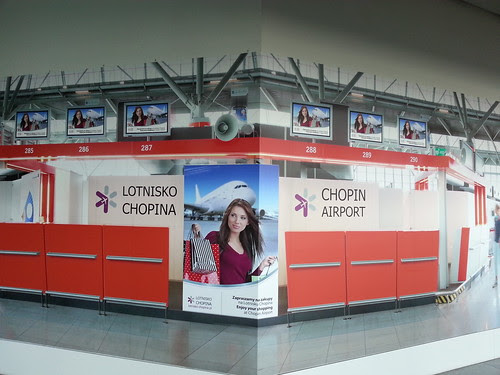 Summary : Washington DC to Frankfurt on Lufthansa
Lufthansa deserves high marks for service. on both the sectors from Washington DC to Frankfurt and back they performed exceptionally well. They asked and constantly sought to give you a drink along with water. They seemed very attentive and the service was enjoyable.
In economy unless you had a bulkhead seat the leg space is pretty standard but  slightly cramped. I think this is no different from most airlines but I wish all airlines gave passengers more space and my bench mark is being able to comfortably tie your shoe laces without performing acrobatics.
I would fly Lufthansa again if I had the opportunity and definitely recommend Lufthansa for the Washington DC to Frankfurt sector.

Popular posts from this blog

August 10, 2016
Emirates flies the Airbus A380-800 from Washington DC to Dubai
There was a time that flying between India and the US meant a stopover in London, Frankfurt, Paris or Amsterdam (I loved Amsterdam). However in the past decade this has changed dramatically. Now `Emirates (Dubai) Etihad (Abu Dhabi) Qatar Airways (In Doha, Qatar) have taken over these routes with their new aircraft and great service.
From Washington DC, Emirates is an outlier, it flies in the morning at 10.55 from Washington Dulles Airport (IAD) and reaches Dubai at around 8.30 a.m. Other flights, Etihad, Qatar and flights with European stopovers take off after 9 p.m at night.
I love this timing but it does cause a disagreement in my house. My wife prefers to fly Eithad due to the timings. My wife's viewpoint is that it is difficult to sleep on the Emirates flight since it starts in the morning. I enjoy the morning flight. My game plan is to sleep less for a few days to my Emirates flight. Once on the flight, I divide …
Post a Comment
Read more